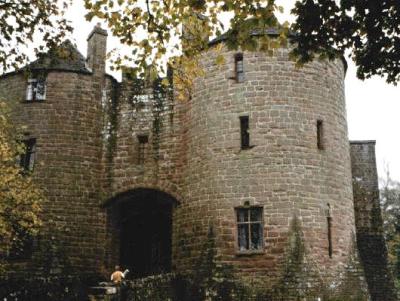 Like a fairytale covered with pixie dust, I was engaged. He proposed in a castle near Wales. I was just 24.

I’d been flown to the UK as a surprise to share the end of my boyfriend’s three month jaunt, planned with his mate before we’d met.

How does it happen that one day you meet a stranger for the first time and feel a ridiculously powerful connection?

Okay, so we didn’t end up together – we never made it down the aisle. But whilst it worked, we fired on all cylinders. It was magic. It was something.

Possibly the strength of our bond is what allowed him to talk me into doing something I never thought I’d ever do.

It was during one of the endless and expensive calls we had whilst he was gallivanting all over the UK. At first he said he’d ring me once a week because of the cost. But that seemed unlikely when he called me the very next day. And the day after that. And the day… well, you get the picture.

I miss you he said. Every day. Our phone calls were long and beautiful, discussing you know – everything.

Send me some raunchy photos to keep me company he begged. Although he couldn’t see how much I was blushing, he soon heard all about it.

He knew, ofcourse, of my body issues. I’m too tall, I’m not delicate, and I’m not waif thin. I’m not pretty. So said the negative internal voices – thanks, brother.

For many years I was my older brother’s physical and verbal punching bag. Mum went back to work once we reached a certain age. From the time I started high school, there was always a good hour or so before any parental figure showed up. Time my brother – a very angry person for reasons unknown – used to full advantage.

To bait me, to hurl threats and insults against the way I looked and my intelligence, to smack me around as he saw fit. It’s something that for the most part, I’ve moved past now, thankfully.

When someone tells you every single day of your life how ugly/stupid/fat etc you are, it sinks in. Throw enough mud…

Of my brother’s “conditioning”, the hardest part to overcome were insults about my looks. I knew I was more intelligent than him – that was easy to see. But I never drew much male attention, so I bought the rest hook, line and sinker.

A remaining side effect to this day is that I can’t look in a mirror or at a photo of myself, and see what other people see.

So as you can imagine, my boyfriend/soon-to-be-fiancé had asked me to do something that was anti every instinct I had. I was supremely self-conscious about my physical appearance.

However, I was madly in love and I really wanted to be able to do this for the man I loved.

I recruited one of my closest friends who had some skill as a photographer AND would be cool about the request. Giggling, we planned the ‘photo shoot’, working some alcohol, pizza and chocolate into the equation.

My ultra-tiny one bedroom unit was transformed. The sofa was pushed into the kitchen. A sheet was taped to the wall and props came out – sheepskin rugs, elaborate cushions etc. And costumes – there were several changes of scanty clothing to consider. I’m nothing if not creative!

A fine scotch lubricated proceedings. We turned on some music and um, got started…

Unexpectedly, it was a blast. Initially I felt strange being half naked with my friend B taking pictures. But with each costume change and more alcohol we were increasingly amused.

I was terrified about getting them developed. B took care of that for me and left me in peace to peek at the results. Drink in hand, deep breath, and I opened the packet.