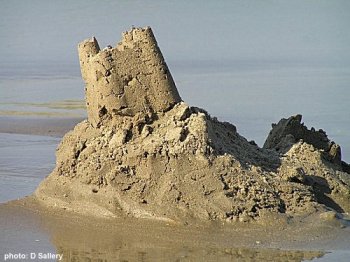 Stumbling, crumbling pathos of my fears leads the way.

While my zombie-like physical personage cycles, walks and shops.

Trailing behind is my butt-naked Self.

Tenuous acknowledgement it all sorta belongs together is, I believe, what creates the coordinated forward momentum.

They’re only words, you know. Words I choke on, sure. But still just words and I’m the one who gives them meaning, and power.

Yet, what if that ‘meaning-making mechanism’ has fallen so deeply down the well, there’s nary a hope of recovery?

This is how it all becomes intrinsic… sandcastles of sadness, salty tears and the slow wearing down of safe ground… we’re accustomed to believe it’s all inter-related and meaningful.

Stepping off the balcony of that derelict world should be easy. Right?

Sometimes the simplest things are worst.

Imagine wrapping yourself in protection with whatever’s on hand? Mightn’t actually help you at all, but then… it was there at the time. When you needed something, anything, between you and what just happened.

All part of the shock and fright.

Should just be on the periphery but, instead, sheaths you with an invisible force field. Nothing enters or leaves. How else can you stay afloat? Survive?

But time comes, eventually, to dismantle such ramshackle efforts. Create proper foundations, ones that won’t tremble and shiver under the slightest of pressures, real or imagined.

No, it’s not easy. Insinuated as they are, amongst everyday things.

And when you try… when you do… that’s what the heavies are for. Big hitters, they don’t play nice and there’s tricks to be learnt, to slip past and out the door.

Not saying, is much tougher than speaking freely. Really is. At least, in theory.

Finally, courage arises, and even then, those letters get stuck. They’re literally what I’ve been choking on, after all.

When, finally, they come… its ripping-off-the-band-aid-shock. But then it hurts more again, later. Much more. Time to rest and retreat and regroup.

Afterwards, standing up seems difficult. Sitting is easier, even in a very public place. Just sitting for a while. For as long as I need.

It’d help a lot if I could just puke, perhaps.

Once again, sleep has the answers for now. Just hopefully not crashing out on the couch!

There’s nothing easy about this, the deconstruction of fear. Fillet-o-fish gutted, it’s a clearer place to be, but rather hollow and sad, for now.

7 thoughts on “Not quite yet”