As mentioned in Mutant Zombie People, I ran into a little trouble with a so-called beautician.

To recap: I needed an eyebrow wax desperately, so I didn’t end up looking like this… 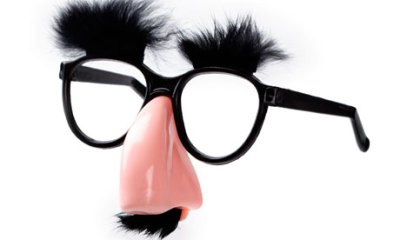 Trust me, I was on the verge!

Okay, maybe not quite on the verge. But, it’d been a while.

Started getting the brows waxed over five years ago now. To allay Ana’s concerns – I’m in no danger of them thinning into oblivion. There’s not a single brow hair that’s shown any sign of vanishing completely, after all these years (stubborn bastards!).

My usual cheap ‘n’ cheerful (but excellent) place, had a one hour wait. An hour I didn’t have. So I strolled around the corner looking for an alternative.

Ah! The Lotus Health Spa was advertising eyebrow waxes… excellent… or not! (As an aside, their website is currently listed as a phishing site by Google!!)

Walked up a bunch of stairs into what was a rather lovely reception. There was a little relaxation room off to one side, and before they take you to the treatment room, your shoes come off and feet are massaged with a warmed towel… how beguiling it is, being drawn into the demon’s lair!

We get started. She asks me what I want, and I tell her: make the thicker parts closest to my nose thinner, but don’t touch the thinner bits and keep the shape natural. It’s what I always say.

I start to wonder if she knows what she’s doing, when there’s one pass of wax under each eyebrow and then, she does an awful lot of plucking… (erm, this is a wax, not a pluck!). I am not a chicken to be de-plumed!!

I’m given a mirror to view the result and I cringe as I behold the opposite of what I wanted. The thinner bits are thinner, and the left is thinner than the right. The thicker bits are still thick! And weird looking.

I’m not rude, but I am direct, probably because I’m in shock. I’m sorry, I’m really not happy with this.

I try to explain what I want again. She starts plucking my right eyebrow again, and then asks me to have a look. Oh! The inner part of my eyebrow resembles a misshapen wedgy blob… roughly shaped and anything but streamlined or neat.

I stare in horror, unsure of what to do next. Eventually I tell her please just try to even the other one up and we’ll leave it at that. I’m sorry, I’m really not happy with this at all. They’re really kind of mangled… (probably shouldn’t have said ‘mangled’).

She finishes and runs to talk to her boss (the owner?), who storms into the little room where I’m putting my shoes on. Doesn’t introduce herself (henceforth I’ve dubbed her Arch Demoness) and demands to know what the problem is.

I cringe as I realise she’s going to give poor Kate (who’d made a mess of my eyebrows) a dressing down while simultaneously trying to resolve things with me. I was far from comfortable and way too polite to just walk out. I wish I had!

The Arch Demoness insists I lie back down on the treatment bed while I explain my concerns. As I do this, she demands of poor Kate ‘explain yourself’. Kate stammers something about my eyebrows being too long and Arch Demoness runs with it… Well yes, the hair was long and that plays a part, and see how your eyebrow is slightly curly here? Well, it will never look the same as the other one! Her tone is triumphant; she’s confident she’s made a valid point.

Really, I say… So, you’re blaming my eyebrows for what’s happened here? I’ve been getting them waxed for years and no one has ever said anything like this before. And I’ve always been happy with the result, but I can’t say the same for this one. [Perhaps a touch harsh?]

The Arch Demoness speaks in an overly loud voice, Look, no one’s eyebrows are perfect! So tell me what you want me to do…

I ask her to lower her voice, and try to explain once again, before she cuts me off on another rant, again with her voice raised and tinged with anger. She’s now yelled at me, at Kate and instead of telling me how she’s going to make me feel better and put my eyebrows back in order, she’s vomiting one excuse after the other.

All of which leaves me feeling particularly nervous.

I’m sorry, but I don’t feel comfortable having any more work done here. I think I’d like to leave.

At this point, the Arch Demoness and Kate are outside the room. Kate is being yelled at. The Arch Demoness storms back and forth to argue with me some more as I gather my things. She keeps claiming I haven’t told her what I want her to do. When in fact, I’d told her I wanted her to fix the problems we’d discussed.

And I’m getting kinda angry. Her staff member screwed up. That happens. But this is my face. If things go badly (as they have), it can take weeks to grow out. The Arch Demoness continues taunting me in a very loud voice.

Did you hear her tell us what she wants, Kate? I didn’t hear her say anything!

Yes I did. I wanted you to fix my eyebrows. But you’ve given me lots of excuses and haven’t actually done anything. Tell me, can you honestly look at my eyebrows and say they look even?

Arch Demoness raises her voice but refuses to give me a straight answer. Instead she bellows in return, Do my eyebrows look perfectly straight?!!

Please stop shouting at me, I say as calmly as I can.

She turns around, draws her face closer to mine while turning a bright shade of beetroot. It’s clear she’s lost control of herself as she screams, NOW I’M SHOUTING AT YOU!!!! GET OUT, GET OUT OF HERE!

As I leave, she keeps shouting at me to get out. Hope there weren’t any other customers in there somewhere!

DON’T EVER COME BACK!!, screeches the Arch Demoness.

I have no intentions of that. But I will be telling everyone I know what happened today.

I don’t know what came over me, but I lied (a little), Oh by the way, I’m a writer. And I’ll be writing all about my experience.

Good, she says (all high pitched and bitchy), I look forward to responding to it.

Great, I say, you total freak!

She didn’t try to charge me at all. Not that I would’ve paid.

I ride away on my bike sobbing a little, thinking about the shocking state of my brows. Can’t go out looking like this! So I find another salon (a place called ‘Waxed’ on Glenhuntly Rd).

It’s staffed by cute young blonde things who look at my face with a frown. I explain the story to them and within minutes I’m in a treatment room.

The girl doesn’t look any older than twenty, but her professionalism is apparent.

Less than ten minutes later, I’m able to look at the upper part of my face without fear. Sure, they’re thinner than I’d like, but they look good. And the difference between the ‘beauticians’ at Lotus Health Spa and these cute spray-tanned bottle blondes… is stark.

Of course, if I’d read the signs right, I would’ve cancelled my evening plans and stayed in that night. Even so, I still would’ve run into the Orange Frizzy Haired Chihuahua Lady…

And now? Due to all the plucking instead of actual waxing, there’s a whole bunch of spiky little hairs growing back already. I should be grateful, really.

33 thoughts on “Nightmare on Acland Street”