**This is a cut down version of an assignment I submitted for the Yogic Physiology subject in my yoga teacher studies. I’ve posted it here mostly because I also created some digital art to go with it that I wanted to share.

Also, I’m hoping I’ve explained the gunas in a relatively simple way and that you enjoy learning a little more about other aspects of yoga** 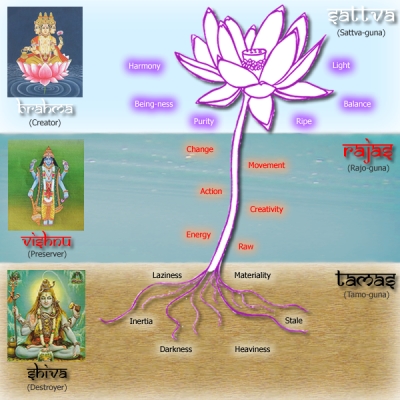 Within Hindu and Tantric/Yogic philosophy, the way the universe manifests is described with numerous intersecting concepts, explaining how Brahman (non-dual consciousness) becomes duality – bringing the manifest universe into being.

The impulse for Brahman to know itself as ‘other than self’ is considered to be the reason the universe exists, as Brahman is characterised as having the ultimate freedom to do or become anything because it contains all things.

Once this impulse occurs, Brahman separates into Prakriti (unmanifest matter) and Purusha (pure consciousness), the root cause all creative processes.

The term Prakriti comes from the root words ‘Pra’ (before) and ‘Kri’ (to make) – and so can be interpreted as before anything is made.

Prakriti is in turn comprised of the three gunas – sattva, rajas and tamas.

The gunas measure qualities of the world, and combine in various forms as the mind, the senses (sight, sound, touch, taste, smell) and the elements (earth, water, fire, wind, space).

And so in this way, Prakriti is the source of the world and everything in it.

The gunas are associated with various qualities and can be used to describe any object. Some of the qualities of each guna are as follows:

All three gunas co-exist in all objects, people and things in varying amounts.

One guna is usually more prominent than the others, and so certain tendencies (e.g. heavy, light, dark, warm, hot, dry etc) become associated with objects, and this forms a part of how we understand and relate to the perceivable world. The predominant guna can also change over time.

The importance of the gunas for human beings is how they manifest in our: health, food, thoughts, actions, the seasons and weather and so on.

Generally speaking, it’s preferable to work towards a more sattvic lifestyle. Some rajas is required, but minimising tamas should be the goal for good health.

An increase in sattva naturally reduces rajas and tamas. This can be achieved by maintaining sattvic thoughts, diet, lifestyle and home environment etc. The more sattvic your life becomes, the more peace and joy you’ll experience.

If there’s no rajas in your life, you won’t have the necessary desire to keep living, working and doing things. However, too much rajas can bring aggressiveness, cruelty, carelessness. Rajas can be reduced by not eating too much rajasic food, and avoiding excessive or extreme behaviours (working/partying/exercising too much).

Tamas is not ‘bad’ as such, but the amount of tamas in your life does need to be managed, as too much can bring depression, fear, obesity and negativity. Tamas is reduced by avoiding tamasic foods, over-sleeping/eating or being inactive.

For good health, its important to pay attention to the food we eat as it impacts both our physical and mental wellbeing.

The gunas of food are not only to do with the food itself, but also its current state – fresh, stale, rotting etc. Also the way food is treated, stored and cooked can also change the state of the food, and thus the gunas.

Sattvic food is also said to be the most ideal diet for those interested in yoga. If what you eat supports a peaceful state of body and mind, meditation comes more easily and is less disturbed.

Too much rajas can destroy one’s equilibrium, overstimulating the body and making the mind restless, active, energetic, tense and wilful.

An overly tamasic diet destroys the body’s immunity and fills the mind with emotions like anger and greed.

For spiritual evolution the gunas must be purified and sattva must predominant moment to moment in one’s mind and body.

The three gunas can also be related to the Trimurti (meaning ‘having three forms’) which describes the three faces of god, being:

The symbolism here suggests that all three gods (and by extension, everything in this universe) are really all part of the one supreme consciousness.

Creation of life can not occur in a vacuum – it exists in time and space – so along with creation (sattva), there must also be change (rajas) and dissolution/death (tamas).

**Update** For another slant on the gunas, read Linda Sama’s post: Srivatsa Ramaswami: The Three Gunas**