These days I don’t usually cry any more when I talk about it. But sometimes I do.

Right now I do.

Perhaps it’s because there’s all this “stuff” that’s been seeping from my pores, sort of like garlic does when I eat too much.

The body has a specific volume and when we hit our limit, the excess has to find a way out somehow. Any which way just so long as it escapes, snaking in rivulets of sadness and grief, words never said and tears never cried.

They escape but they become these weird ghostly apparitions of emotions never felt. Squished down as they were because back then, there wasn’t the time or space to let them out. Not if I wanted to keep my heart in my chest and be able to stand up, walk around and function in some (twilight) state. But still, I was sort of functional. Enough that if you didn’t look closely (and who ever really does except others who’ve been to these places), then for all intents and purposes I looked okay.

But because of all that, those squished and faded emotions never got a shot. Now, misshapen and hobbled they still want to be heard and felt. They aren’t going to be dismissed, either.

The consensus seems to be that it’s because I’m stronger now. Because I’ve been to the bottom of the sea and back again, my burden is so much lighter these days and there’s more space.

Now entering that space is wordless sorrow and fear, floating without anchor. Beating upon my ribcage, my kidneys and my heart – expressing that long-held pain like a sickness now oozing with boils and a mess of other infections that just need a place to meet the air, just so there’s an opportunity for healing for these things, too.

Corrosive. That’s the word my friend Jaliya used. The effects of PTSD/depression/anxiety on the body are corrosive. Like acid, but not the woo-hoo-I-see-purple-dolphins-cartwheeling-in-the-sky kind, that people do for fun(?! yes, apparently they do). Think instead of battery acid, released from its container and drip-dripping its way through places it should never be. Corrosive just like that.

Except we’re talking about the body here. My mind was terribly busy for the longest time (paraphrasing an episode of Grey’s Anatomy) with the glue and the tape, just keeping myself from falling apart.

And so it goes.

I’ve been so very sad of late, just letting the sadness wash on through. It hasn’t been easy and certainly, there’s been no joy in the process. Just a release of what was, and what I never got to feel back then when I should’ve been feeling it. Stale emotions never vanish, you see. Not until they’re done.

I’ve this habit of watching TV shows that depict PTSD. I don’t know why because I find them very disturbing and I can’t get through them without bawling, heart thumping and I wonder sometimes… really wonder if it’s ever gonna be not like that.

Last year, True Blood did a small piece of PTSD. This year it’s been featured in both Grey’s Anatomy and the spin-off show, Private Practice. The latter has been the trickiest one for me to watch because it is most similar to my own experience: senseless violence perpetrated viciously. I was a mess, watching that stuff.

More interesting to me however, is the way the after-effects of PTSD are dealt with on these shows because that’s the guts of it all. My main complaint is the very neat amount of time everyone’s PTSD seems to be resolved in. Of course, Hollywood likes a happy ending and neatly resolved story-lines that don’t take too long. The characters on these shows all seem to have a significant “incident” that marks their healing work as being “done”. But it’s just NOT like that.

There’s so many layers to the poisonous PTSD layer cake, not to mention the acrid frosting on top. Recovery comes in waves and it requires a shit-load of hard work. There’s so much to be undone because PTSD isn’t topical or localised.

Instead, PTSD is everywhere like a virus: taking up residence and proceeding to invade all territories. Just when you think you’re celebrating because you’ve ferreted it out of one zone, you realise that it’s deeply embedded in seven more.

Don’t get me wrong – I’m glad that Hollywood is taking a stand for PTSD, showing it as a real disorder that can be healed, and that it can happen to all kinds of people (it ain’t selective). And there’s been some excellent demonstration of dissociation, and weird behaviours that seem entirely unrelated but hell-yes they’re all part of it. So that’s the good news.

To paraphrase something else from one of those shows: it ain’t right to not feel things. We’ve gotta feel what needs to be felt.

And that’s what’s happening to me right now. I’m feeling it all, and it can be really quite overwhelming.

Of course, then there’s the discovery of what else PTSD has been busily destroying in its spare time.

Another term from Jaliya – chronic distress – this kind of ongoing strain draws on the resources of the body just to keep going.

So this morning I got weepy in the doctor’s office, trying to explain the complexities of the last five years. About why I never made it to a GP when I was assaulted, and what I’ve done to keep myself afloat and surviving ever since. I’ve done pretty well, really. But now I need some healing from the world of medicine, whereas I generally prefer alternative therapies.

The doctor (I’d done plenty of research to find a decent and open-minded one) was very kind and supportive. She wasn’t dismissive about anything I told her, and was pleasantly receptive when I told her I handled the worst of my symptoms with therapy and yoga… I feel like I’m in a safe place but still I cried, damnit!

I started telling her that I know I’ve neglected my body, until she reassured me that I was probably just too busy with my brain and my emotions to worry about anything else. It’s not uncommon, she says.

I also told her that for the first time ever, I’m starting to wonder if I shouldn’t perhaps have some medication for the anxiety. Just because hell, anxiety can be such an asshole sometimes, y’know? First though, we’re trying some vitamin supplements which she’s hoping will help me out a little more: magnesium and l-tyrosine. 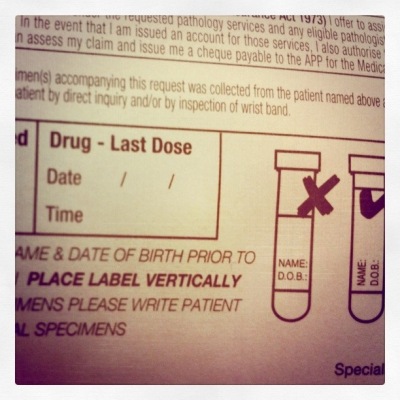 And we’re doing a full work up. I donated some blood and urine samples to the pathology people so she can start working out exactly how much damage has been wrought on my physical body.

It’s never-ending and yet it must be ending, right? I must be getting to this particular point in dealing with everything because I am getting to the end of it, as Rachel suggested to me just last week. I really, really hope so.

But it’s a very long-fucking-road. Where am I again?

12 thoughts on “The poisonous layer cake of PTSD”