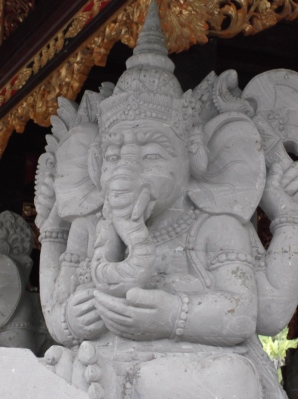 In some ways, I didn’t get what I was hoping for from my trip.

Don’t get me wrong – going to Bali for my birthday was awesome.

But I’ve since worked out that mostly, what I really wanted was some alone time.

Instead, on my first full day there I found a new friend. Perhaps… I got what I needed instead?

She’d also arrived the day before, from England. We were staying at the same guest house and met over breakfast. How classically clichéd! The more we talked, the more we realised how much we had in common. Fancy that.

Both there to do yoga. Both had the same camera, and similar back-story as to why we had this cheap and cheerful new piece of tech. Both with similar ideas about our trip. We did a couple of things together on purpose, but would then run into each other out and about in Ubud.

Before long we were planning activities together – yoga classes, sightseeing, massages, and my new friend even joined my birthday celebrations (a half-day tour and then later, dinner in Ubud at Cafe Lotus).

It could’ve all been very single white female, and yet it wasn’t. She’s super-nice. 🙂

Having recently re-read The Celestine Prophecy (which my travel buddy actually had with her on the trip!), I started to wonder about the myriad of “coincidences” that brought us into each other’s world.

Rather more prosaically, she claimed that of course we’d end up in the same place and liking the same things. I didn’t quite agree – we could’ve easily disliked each other, a mutual love of yoga or no.

Like I’ve written already, I don’t really believe in coincidences.

So I stayed open to finding out what sort of lessons we could learn from each other.

For me it was… that I’m an ultimate bleeding heart. Which I really knew anyway, of course. But I still need to create a few boundaries for myself (doh!) in order not to be a complete push-over when my heart gets involved.

Going to places like Bali and Thailand are especially challenging for people like me, because I want to help everyone I see.

Even though I don’t have huge amounts of money, I go to Bali and I’m perceived as rich. This is particularly hard for me to deal with. So I tip a lot and don’t haggle much when shopping.

Hanging with my new friend taught me a little more pragmatism. This is something I’m going to need when I eventually get to India, I’m sure.

For her… and perhaps this is slightly presumptuous, but I think she learned a little more about generosity. By her own admission, she’s “tight” with her money. She was often bug eyed about my tipping habits, and furious at local scams to try and separate us from even more of our hard-earned.

So one night over dinner, I explained why I do what I do – my personal philosophy on abundance. The lessons I learned while being unemployed while doing my yoga teacher training, and how that changed my views on giving.

How I used to be stingy, but now I see money as energy. Something we can exchange, and how that keeps the flow energy moving around the world.

That we don’t create abundance by holding onto everything we’ve got as tightly as possible, but by sharing and showing loving kindness to others.

That trusting in abundance enabled me to be supported by lovely people, find a job before Christmas and still go to Bali, when I’d expecteded things to be tight.

I think… we balanced each other out a little. And it was nice.

There’s more – I learned a lot from the yoga classes I went to as well. I’m still reflecting about those lessons, so look for another post some time soon.

But the alone time I craved? Didn’t really happen as much as I needed.

You’d think that for someone who lives alone anyway and doesn’t do heaps and heaps of socialising, that wouldn’t be a problem.

Still, I’d like to be away from my usual environment. Somewhere beautiful and isolated where I can really get stuck into my writing.

I did get some writing in whilst in Bali, but not enough. However, my holiday certainly revived my creative inspiration!

So anyway… looks like that’ll have to happen another time soon. Maybe a weekend escape in early 2012?

For now, I’m happy that I made a new friend and (re-)learned a few more life lessons.