Just after 6pm this evening in the post-work CBD chaos (reeking of desperation and celebration), this was to my right, part of Melbourne’s town hall…

And this was in front of me… 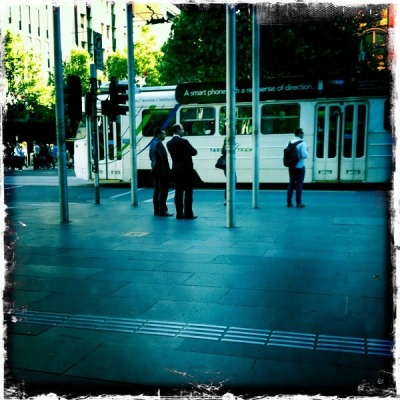 As I waited for the Chick From The Desert (aka Anthroyogini)…

Then, like a tiny yet furious hurricane she arrived with fierce hugs and oh…maybe a tiny little tear at the corners of her eyes (it was pretty awesome to meet after “knowing” each other by blog only for so long!).

Although she was in town for a short but intense visit only, and we had just a few hours to get acquainted in the flesh!

So I took her to Spicy Fish in Chinatown for a glorious dinner. Then, for something completely different for a girl from the outback, the Gin Palace (they’d apparently do well to open a similar bar up her way!).

A vodka martini for me, a margarita for her. And endless chatter. Oddly, we didn’t really talk about the blog world that much. But Amanda is indeed, a kindred spirit.

I left her at Collins St with more hugs and promises of more time, some time soon. Both visits to The Alice and more here in Melbourne.

And yayayayayay!! Because… I do believe I’ve identified another member of my tribe (I think they’re all spread quite far and wide)!

All it takes is a second.

The crowded CBD embraces me in its familiar sounds.

Buy The Big Issue! Support the homeless and long term unemployed says the familiar face on the corner of Swanston and Collins.

Hustle, hurry, watch out whisper the feet and faces of harried city workers heading home for the night.

Just like me. Heading home, but not so harried, on my way to yoga class and not late as I’d thought I might’ve been, detained at work in a chat with a co-worker as I explained how evidence, any evidence can be used to prove all kinds of things. In an attempt to tell her why I simply can’t get into the whole conspiracy theory thing…

But anyway. Here, on the street and amongst a wash of people, multiple tidal flows and currents, gotta be careful not to get sidetracked from where you’re going.

Until I notice the guy just ahead of me and off to my right. Red and white horizontal striped shirt. My thoughts float off on their own tangential current and it takes me a while to catch up.

And they say things I’m not proud of.

Dreadlocks. Dark skin. But no! It’s not HIM, right? This guy’s too broad shouldered, too tall. So that’s okay. And he has body odour, nope HE never smelled like that. For some reason his skin always smelled like patchouli or something (crap, I wish I hadn’t remembered that!)… nope, it’s definitely not him…

I’m just a touch hyper-vigilant now. I notice everything around me. Though not out of freedom or joy, but deeply held habits.

I don’t feel afraid really, just alert. Just watching. Just hoping against hope, even after all this time, really hoping that I never do see him ever again.

But I remind myself that he’s not my enemy or anyone else’s. I know this. Still, I look. Every time I see a guy that looks remotely like him, I check to make sure it isn’t. I see differentiation and potential danger. Still. It makes me feel a little bit ashamed, almost like I’m being suspicious of an entire sub-set of people – those who look anything like him – for no other reason than their physicality. It feels kinda wrong to still think/react that way five years later.

I’m not completely free yet. Damnit!

But I know I’ve come a very long way. I’m happy. I’m not depressed or dealing with PTSD flashbacks. Even the panic attacks have begun to fade. And I’m doing way better than I ever imagined – in the depths of my pain and terror – was possible.

In some ways, I’m my own hero for surviving, being able to smile and dance and find compassion for all beings, myself included.

But while I confirmed it wasn’t HIM, I was engulfed in a burst of adrenaline that left me feeling drained. And tonight in Shadow Yoga, it was back to the Balakrama (Stepping into Strength) prelude. I was not feeling strong, and as such had my asana royally kicked.

My shoulder by the way, doesn’t require surgery (HOORAY!). It does however need lots of rehabilitation to break down the scar tissue surrounding my AC joint and rotator cuff. Let me tell you that rehab makes me want to say LOTS and LOTS of rude words.

So I now feel safe to push my shoulder a little more in yoga, but the stiffness is pretty bad. Yet tonight, it wasn’t the only part of my body feeling weak. My right leg wouldn’t stop shaking during standing poses, and after the fourth (two per side) Hanumanasana, I couldn’t do much more than roll sideways out of the pose.

Gotta find my legs again, regain my balance. Just like learning to handle yourself at an ocean beach: when you’re wading in or out of the water, you’ve gotta keep an eye on the upcoming waves and choose whether it’s best to stand your ground, or dive over or under the crest of the wave…