Most excitingly, this is the first full day in my new home where I don’t have to go anywhere or do anything in particular.

Okay, I had to do one thing, but it was a very, very good thing.

I arranged delivery for my recent eBay purchase: an old antique writing desk!

It’s quite large and sturdy, and fits neatly into my new writing nook (in a corner of the kitchen).

My nook has its own nifty window looking out on the back courtyard which is all leafy and green and stuff. Its private, gets plenty of light and all up, it’s a great spot for writing!

The pièce de résistance has to be my desk though. Apparently it came from Melbourne’s Treasury Building.

I love it – I’ve yet to absolutely cram it with gadgets and rubbish, so my set up is very minimal at present. But I betcha anything I can’t keep it that way! 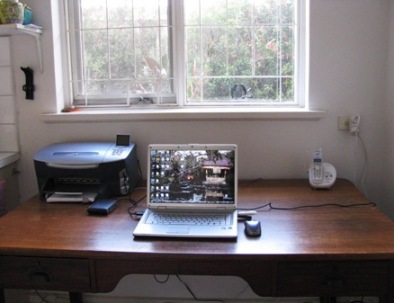 It’s very me – suits my personality and style…

The two drawers are really deep – which means they’re probably gonna end up holding a whole bunch of crap I should really throw out.

And someone’s written “Colin” inside one of the drawers in pen with a little cartoon head above the name and there are plenty of ‘customised’ markings – carved initials and stuff on the desk top. 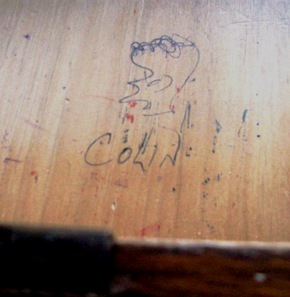 So I’ve kicked my old flat-pack desk to the curb. Actually its in the carport right now on account of the deluging rain (which we need as a country that’s been in drought for a good twenty years now). But its going – either free to whoever wants it or… donating it to the local charity. It’s not even worth selling on eBay.

Can anyone say ‘elephant in the room‘?

Yeah, okay. I’m still on the road back from this unexpected and painful trip to PTSD-land.

And today I’m not ready to write more just yet about what’s going on. But I’m getting there. The words are forming. Well, to be completely accurate, my words tend to form as pictures and images first… (my possibly rather odd writing technique) before they translate into text…

Moment to moment life right now? It’s a fine balance between keeping myself busy enough so I don’t just stay in bed (would be so easy right now) and having too much going on… which just pushes everything back down again. If I’m too busy then sure, I start to feel better, relatively speaking.

But then once I stop being so busy, my heart pounds like a… a… something that pounds really fast… (apparently it has returned, but its all beat up like a wounded animal) and there’s a lot of physical pain involved with that.

I copped that experience last night, and spent an hour wondering if I was gonna have a heart attack. But then I crashed out on the couch and did a lot of sleeping.

The more meditation I do the better, although sitting still for too long isn’t ideal either right now. Argh!

So, I need to walk the line. I want this stuff to come out, but at the same time I have no wish to become a pillar of stone or completely drive myself nuts. Or repress this stuff any more.

I want to feel it and work through it. I want to drain every last drop of this deep, deep rage and sorrow from my body and mind.

And that I suspect, is gonna take some time.