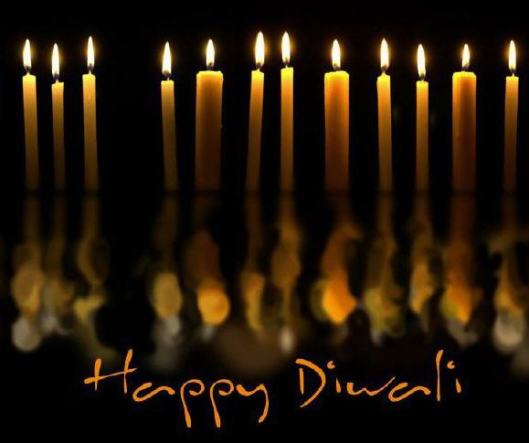 Heading out in a little while to a Diwali celebration at a friend’s place – someone I met through the various kirtan groups I’ve been hanging out with.

Diwali translates as “row of lights” and it’s a beautiful tradition. Basically, it’s about bringing people together and sharing food, activities and fun. Many lamps are lit to create a beautiful illumination over the five days of Diwali.

Diwali also ties into the Ramayana, as a celebration of Rama and Sita returning from Sri Lanka after Rama (and Hanuman) defeated the demon Ravana. So your basic triumph of “good” over “evil” or light over dark. I always like to consider these sorts of stories as inner work: we all have our demons, our inner hero and that part of us that needs to be protected. And when we accomplish a triumph or two over the “darkness”, or those things that would pull us down and away from our essence nature, there is a sense of illumination – hence all the lamps.

He who Himself sees all but whom no one beholds, who illumines the intellect, the sun, the moon and the stars and the whole universe but whom they cannot illumine, He indeed is Brahman, He is the inner Self. Celebrate the real Deepavali by living in Brahman, and enjoy the eternal bliss of the soul.

The sun does not shine there, nor do the moon and the stars, nor do lightnings shine and much less fire. All the lights of the world cannot be compared even to a ray of the inner light of the Self. Merge yourself in this light of lights and enjoy the supreme Deepavali.
~Swami Satyananda

And hey – this year has been full to overflowing with my own inner battles. In fact, life’s kind of been like that for the last five years! So I’m very much looking forward to this evening of honouring the light in myself and other people.

So what does a private Diwali celebration look like in Australia? Well, first of all, our hostess is originally from India, so it will be a hybrid Indian/Australian festival. We will make rangoli, get our kirtan and mediation on and later, eat together. I’m contributing some Indian desserts and organic wine, and a whole mass of tea lights.

And I hope that you take a moment to reflect and appreciate all that you’ve achieved this year. All the demons you’ve battled and defeated, and remember that all of us are none other than Essence Nature.

Even the “demons” we encounter – they are too, are just working through their own perceptions of this life.

Today is day two of a great annual Hindu festival called Navaratri. It’s the celebration of the triple mother goddess, as the creative force of the universe. Whilst Lord Shiva is said to host all things, it is the Goddess energy that takes form, and thus the universe is manifest.

The Goddess in Indian tradition exemplifies the unification of all the manifest energies of creation. Our usual experience of the world has us interacting these energies in their most dense, gross and seemingly separate forms, keeping us from realizing the inherent connection inherent in all.

In her mythology, the form of Devi – the Goddess – arose during a great war between the Gods and the Titan-Demons. The Gods were at a standstill in their efforts, unable to make any progress against an equal opposing force. The Gods realized that their animate energy, that which gave them power, was the very same source of the power of their enemies and so they united and externalized their energies to create a Goddess that would be able to vanquish with the Titan-Demons as an extension of Herself. Indeed, Durga is the only deity worshiped iconographically with the Demon she destroys. She liberates her foes as a part of Herself; this is Her boundless compassion.

For those interested, there’s a very long and interesting article called “God as Mother” which can be downloaded from the Divine Life Society’s website discussing Navaratri in a great deal more detail than you’ll find here.

Navaratri is depicted as the battle of Rama against Ravana (lord of the Asuras) with an eventual victory on the tenth day. But the battle is also one of the Self in attempt to gain liberation, and the knowledge that form (Ma/Goddess energy) is the way we can achieve it.

The final day is celebrated as the culmination of the three aspects of Ma as Tripurasundari – the triple Goddess. The celebration held this day is called Vijaya Dashami – the Tenth Day of Great Victory.

If I was with the rest of my yogi crew in the US or Thailand I could join in the great rituals and celebrations being held. But as I’m here on my own in Melbourne, Australia… I have to do what I can which means performing mantra, visualisations and maintaining connection to the Goddess energy as much as I can.

All very good timing for me right now with my “woe-is-me” attitude. So, I’m gonna engage in Navaratri with all the sincerity, gratitude and love that I can. And use our kickass Goddess’ to help me pull out of this unusual slump.