Now for a practical application of the Navaratri post I’ve just added – I think yesterday was something of a turning point for me.

I’ve just finished reading a rather long but beautiful post by Miss Sensuality. I resonate with her words and find they’re somewhat related to this post.

As you may have read in previous posts, I’ve been feeling pretty sorry for myself that my grand adventure hasn’t quite worked out the way I wanted it to – yet.

I took a gamble, I went with my gut – and as my mother would say – I threw away a perfectly good job. Yup. Up and left it. Because I’d been there too long. Because the politics and BS were getting to me. Because my boss was being pig-headed and wouldn’t give me the minimum leave I needed to attend my retreat (he offered two weeks instead of three – I resigned and took five weeks!)

Little did I know the economy was set for a tailspin, that when I returned, jobs wouldn’t be as plentiful in my industry as they were when I left. Never in my wildest dreams did I expect that almost seven weeks later I’d still be looking for a job. I can’t even get a temp job at the moment doing crappy admin work!!

Like Miss Sensuality, today I saw all these people with places to go, jobs to get back to, moving with confidence of their place in the world. I realised I used to be one of them. And I realised that I am not my job, I am not my money (which I’m rapidly running out of), I’m not my clothes, I’m not status, I’m not where I live. I’m still here and functioning without those things, without any security or income. And I am who I am. I am no different from anyone else. There is freedom in that knowledge.

On the back of these thoughts I had two interviews. One for a job I am not that interested in. The guy interviewing me spoke in sound bites and buzz words, and kept telling me what a “great opportunity” it was to join his team. He spouted statements that wouldn’t seem out of place on “The Office“. Apparently I’d be “locked into two years in the role” but after that I could “go anywhere in the company” (a very large corporate). Now here was someone clearly self-identifying with his job and his company as part of what makes him secure and comfortable.

As for me, I’m not “locked in” to anything. Even if I did take this “great opportunity” if it were offered to me…

The second interview was with a recruitment agent. Now, I’ve spoken to almost every half decent recruiter in Melbourne in the last seven weeks, so I thought I knew how they all operated. How wrong I was! This lady organised to meet me at the Sofitel in Melbourne in a ritzy bar on the 35th floor. She presumes we’re having a drink, where I’d presumed we were having tea or coffee. Red wine for me and champagne for her.

The Atrium bar at the Sofitel, Melbourne

An interview that was booked for an hour stretched into two as we chatted like a couple of old friends. She gave me insights into the world of recruitment not offered to me by any of the others. We talked about her kids, our cats, the benefits of acupuncture. She treated me like a person instead of another faceless “candidate” and it was a breath of fresh air in the odd world of job hunting and interviewing.

Who knows what will come of that meeting if anything, but I’ve shrugged off some of my cynicism and negativity, thankfully!

Then on my way home (train, then bus) I’m on that last ten minute walk. I spot a large black bird – a crow or raven – sitting in a small bush next to someone’s letterbox. It doesn’t move as I approach. It eyeballs me, opening and closing its beak frequently. I think it might be injured as it isn’t flying away although I’m very close. 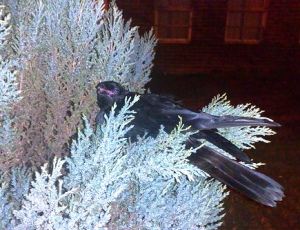 The beautiful bird I encountered on my way home!

I don’t want to leave it in case it is injured. It seems to be asking for help.

Just then a car turns into the driveway and a woman gets out. She comes over and inspects it with me, and agrees there’s a chance it might be injured. Now there are two of us standing there and the bird doesn’t appear distressed, staying right where it is.

Luckily, the woman’s husband works for the council and will know who to call to collect the bird. She says she’ll give it half an hour and if its still there, they’ll ring someone. I’m satisfied with that and walk home.

This experience too, was heart warming and human. A complete stranger, she could have thought I was crazy for caring about this bird, but instead she offered to help me.

In Norse mythology both ravens and crows have a prominent role. As they do in other cultures too. So call it superstition if you like, but seeing this beautiful black crow/raven possibly in need of help was an omen for me. The Norse associate them with Odin and the Fates – death/change and wisdom. At the end of a day where I had a shift in my current world view, this was not strange or disconnected to what was going on. Not as far as I was concerned anyway.

As I meditate on the slaying of my “demons”, I’m grateful for the odd experiences that have made up my day.

I’ve managed to grab a few insights, see “reality” a bit more clearly and connect with other human beings who have shown more warmth in those short encounters than I’ve experienced from the various recruiters and other people I’ve met on my job search thus far.

And then there’s my crow or raven. I don’t care which it is, but I’m glad it was there.