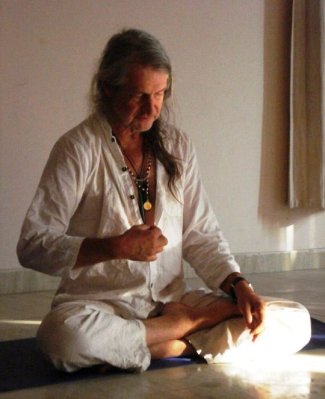 **Note: La Gitane raised a valid point in the comments for part 2 of this series. When Mark is talking about “your yoga”, this doesn’t mean only doing the asana that you like, or not doing a full complement of forward bend/back bend/side bend/twisting/inverted poses – if you’re capable of doing so. Instead he’s talking about a practice that contains the appropriate elements of a yoga practice, but in a way that suits your body and its limitations. Just wanted to be clear about that!**

Around two hours into our Sunday session, we’d just finished our first asana practice for the day when a young girl and her mum walked in. Mark had clearly been expecting them: This is Melissa and her mum Margaret. Come in and sit down, but just watch the rest of the group for now…

(Fact: I almost never notice famous people even when they’re right under my nose. And being in a small windowless room full of yogis proved no exception. “Melissa” was in fact, Missy Higgins – a talented and successful singer/song-writer in Australia. Of course, I didn’t realise until after we’d finished for the day when I heard others asking if it was ‘really her’).

Even when Mark quoted lyrics from one of Missy’s songs, I still didn’t twig:

…But the search ends here

Where the night is totally clear

And your heart is fierce

So now you finally know

That you control where you go

Although we didn’t know it yet, Missy’s mum Margaret, was our lesson for the day. Especially for all the yoga teachers in the room.

All of Margaret’s kids love yoga and she’d always wanted to join them but found it almost impossible. She had some very serious back problems and could not join in a regular yoga class. But she could still breathe, and as such, yoga was possible.

Mark promised to help her find “her yoga” – a practice she could do, that would benefit both her body and mind.

She was game for it, and so after listening to our dialog with Mark for a while and watching while he put us through more asana practice, he started to ask her about her situation. I won’t go into what she told us specifically, but essentially any movement beyond very gentle forward bends was out. No rotation of the spine.

It meant that her practice was mostly seated and on her hands and knees. Very little standing, no twisting and nothing energetic or advanced. At the start of the session she mentioned how her mind drove her crazy with non-stop thoughts, but by the end of practicing “her yoga” (which we practiced with her) she felt so much better and found her mind was much calmer.

Now, Margaret’s yoga doesn’t look like anything you’d find in a yoga class, or even in what is taught at yoga teacher training. But still, yoga it is. And, with continued daily practice, it should benefit her every bit as much as a full-on hour and a half yoga class works for other people. Because it’s appropriate for her body and because it allows her to consciously engage her body/mind/breathe connection.

Other reasons it can still be defined as yoga are directly related to the principals of Strength Receiving that Mark taught us:

There’s a lot to unpack in these principals, but as I’m still unpacking them myself, I’d suggest you buy Mark’s book and/or get to one of his workshops if you can. I promise you that you’ll love it!

Towards the very end of the day, as we sat in naturally arising meditation, Mark had us chanting and placing mantra at various points of the body. Repeating the mantra at the heart centre, the crown of the head, the shoulders, the belly, the groin, the upper legs, the knees, the top and bottom of the feet.

Try this using any mantra you know. It very much felt to me like “self-puja” (or self-worship). Not as in blowing smoke up your own… y’know. But honouring your Self with love and respect. Recognising the miracle of your existence, and that your yoga practice is a sacred contract with yourself to remember who you are, every time you practice.

I’d say the most important thing I got from my time with Mark was the transmission of his gentleness. He reminds us that our yoga practice isn’t meant to be a struggle, but a pleasure. And that we have all of the tools we need for uncovering our own sense of beauty and divinity.

Technically, a yoga practice must make a person feel better. Then it is correct practice. “There is no bad yoga. If it’s not good, it’s not yoga!”

And when I get the chance, I’ll spend more time with him again. Absolutely.