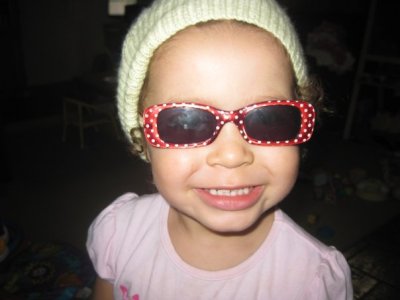 I just love this photo of my almost three year old niece. Hat courtesy of her grandma and apparently she wore it obsessively every day for a little while there. Love the kooky mix of a yellow hat and red polka-dot sunglasses! Someone’s just too cool for school already, hehe…

(Brought to you by the wonders of auto-schedule. I’m still away on retreat!)

I accidentally sat down on my poor little niece on Sunday!

She’d been sitting next to me when I stood up for some-reason-or-other. Stealthily, she moved over to where I was sitting without saying a thing! Then I went to sit back down without looking behind me…

When you’re two years and eight months old, having your thirty-seven year old aunty sit down on you – even if it’s only for seconds – is quite the shock, I’d imagine.

She wasn’t injured. But those beautiful long and dark brown lashes drowned in the backwash of her tears, and her deep dark chocolate puddle eyes were entombed in a layer of moisture.

So I picked her up and gave her many hugs and kisses. Told her how very sorry I was. Checked she was okay. Still, she cried.

Then I asked her what I could do to make things better, suggesting a game of chasey around the house (she loves chasing/being chased).

Immediately the tears dried up and she shouted “Yes!!!”.

So we played chasey. Several times. And there were tickles. More cuddles and kisses. Laughter.

And it was over. Forgotten.

Sometimes I wish that as fully grown humans, we could retain the ability to move on just like that… to just drop our shit and get on with life.

Wouldn’t that be nice?

Seems to me, that’s kinda part of what yoga is about. Or something like that.