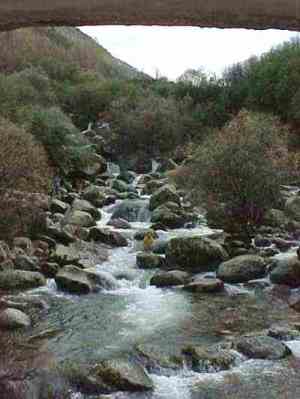 Now that I look at it, the path that leads to where I stand (for the moment anyway), has been this kind of run-away stream. For the most part of its own accord, it’s flowed merrily back to source with little direction from me. For a long time I simply followed the path of least resistance, come what may.

I was not purposeful, not imbued with a sense of knowing where I was going. Just had a gut instinct about where I had to get to. Like to like, I floated along – sometimes easily, others not – and with great surprise and yet no surprise, found myself at the beginning of where I’d meant to get to all along.

But growing up in a world devoid of clues as to exactly where that was, I relied on little more than my intuition and sub-conscious cues. And it took me a while to learn to trust all of that. Hence, this bizarre quest of sorts… this journey with so many twists and turns…

Picture a dust-drenched camping plot an hour’s drive from Canberra (the concrete capital), amongst parched gum trees spattered across a thirsty horizon, on a summery late-January weekend… add all those velvet and lace outfits, hippie clothes, cloaks, capes etc, in country-Australia, at a green and sweat flecked camp ground…

The Pagan Summer Gathering of 1988 was in session.

I was a long flowing skirt wearing, belly-dancing goddess woman – teaching a unisex belly-dance workshop (based on my theory of dance and movement – see point #6). J was all Celtic-warrior-hard-man-long-hair-and-beard spiritual stuff.

The day of my workshop, was country-Australia-harsh-unforgiving, get-a-tan-in-the-shade kind of hot. It was a blast, even though only a single guy turned up. It was my first ever gig teaching people something I wanted to share.

There was also a workshop on runes happening a bit later and both J and I were interested. I’d wandered over to see what was going on, glanced at the guy who’d be leading it (someone I’ve written about here before and labelled A) and swiftly backed away. Little did I realise he was to become my teacher and years later, my lover.

I was “saved” by a good friend I hadn’t seen in a while. He pulled me aside to tell me some serious news. With a legitimate excuse to not go, I dragged my friend back to my tent to commiserate, eat food and talk.

But J did go, and excitedly returned. This guy is the real deal. He’s learned this traditional system of runes, he’s Sydney-based and will be teaching classes.

An unspoken agreement occured: we’d be going to those classes. Despite my initial reaction to A, everything that J told me sucked me in. A western style martial form with weapons? A kind of western tai-chi? Herbolgy? Mythology? Runes as an oracle?

This PSG wasn’t amazing just because of this new fork in the road. It was also my first proper introduction to Kali, my Mahavidya (another story circa 2008, ten years later).

At this gathering, that slightly off-center guy (even for a group of pagans) I’d met at Pagans in the Pub was running a Kali ritual. Which involved nudity but no sex (many of these things did), mantra and dancing. Can’t remember anything else about it, probably because I didn’t understand it much.

Didn’t really think about it at the time. And so it was… Kali had already staked something of a claim. Then, maybe it’s just always been that way?

Back in Sydney, J and I and another friend started studying this runic system with A.

We’d travel from one side of Sydney to another every fortnight for about a year, learning an oral family tradition that’d been handed down from one generation to the next, and had finally been taught to four outsiders, to keep the tradition alive.

One of those four people was the man who’d become my Guru (he’s trained in many esoteric traditions). He was living in Australia at the time, so when he came back from the UK, he taught a few Australian students of his own, including A.

And what we learned was a rich and fascinating living tradition of western shamanism: animal familiars; spirit journeying; trance work; rune reading as an oracle; weapons training. And so much more. So interesting, especially since we white folk are convinced we lack such history. But in some pockets of the world, this knowledge lives on.

Around September of the same year, we were handed flyers for a rune workshop with my Guru. J was working that weekend and made the call not to change his work schedule. But I did go, staying at A’s place overnight. Which is kinda sorta where my Why I have a Guru series picks up…

Something I haven’t mentioned in that series is how my Vedic astrology chart correlates with some of the monumental changes in my life. Vimshottari Dashas are major cycles of time a planet/moon rules in your birth chart and according to Vedic astrology; this can influence your activities and state of mind.

When I moved to Sydney from Melbourne at the age of twenty-one, it was smack-dab on the transition into my Sun cycle – a time of activity. And when I met my Guru, it was the exact transition from Sun to Moon cycle – good for inner work but little else!

The first encounter with my Guru left me enamoured, dazed and definitely a little confused. Also, quite radiant, joyous and kinda high! I returned from my weekend up north absolutely raving about it all.

Of course, J was far from impressed. I’d say it was blatantly clear that if asked, I would’ve gone to live wherever my Guru was (that’s never actually happened, not yet!).

When I went back a couple of weeks later to talk to him some more, I was given some practices to get started with. Off-handed, and without really knowing anything about my relationship with J, my Guru said to me – Oh, so you’re still engaged? Like he was reading my inner turmoil and simply spoke it aloud…

Without doubt, that day was one of those moments where knowledge descends. But more on that topic soon. It was a quickening, a ripening, perhaps a remembering…

By this time, things between J and I had been deteriorating for a good six months. We were slowly imploding, and here I was, infatuated with another man – even if it wasn’t actually infatuation in a romantic way. At the time it sure felt romantic to me, in my state of delusion and elation!

To complicate things, I’d also had something of a crush on A for a while, but told no one. Not a soul. Actually, I was kinda proud of myself that I was aware of the crush and had no plans to act on it. I was with J, and A was married.

J often blamed our relationship breakdown on my feelings for A and my Guru. But the truth was, we had our own problems and it would be wrong to blame external influences. I will admit that my Guru was a catalyst, but not in any obvious way. Perhaps it was just all part of that quickening…

As it seemed less and less likely J and I would ever get married, we both withdrew. The time of talking, arguing, pleading, crying and hoping was mostly done. I took off my engagement ring in protest, and left it on a shelf in the lounge room. J responded by playing more and more computer games with the study door shut.

Nature abhors a vacuum, so as many couples in that situation do… we found fault with each other more and more, and our focus was drawn in opposing directions. Until there was no longer a way to mend our broken bonds.

But before that, we had more rune workshops with the head of the family tradition, who’d flown to Australia. I had my very first and quite shocking experience with trance work, and found out just how deadly a half-blind old man can be in martial arts training!

J and I both delved more intensely into our mutual interest in this tradition. Yet all that time… we moved increasingly out of each other’s orbit.