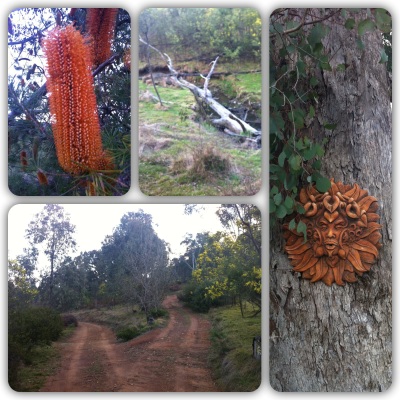 So here I am, second week back from my lovely writing retreat and I’ve come down with the flu.

Bah! Change of season and all of that, but honestly, what I’ve noticed more than anything since my return to the “normal” world is that this world? It really ain’t so normal.

In the middle of the bush, with all of my basic needs met – sleep, food, yoga, meditation, writing and hiking – I can’t express how INCREDIBLY well I felt. Just… brimming with health and vitality.

Everything I did for myself was appropriate to the day and how I felt. If I needed more sleep, I took it. If I wanted a longer/shorter meditation, so be it. Time wasn’t a feature in most of my activities other than remembering to go down the hill for dinner just before it got dark.

I returned to Melbourne. A biggish city. Well, big enough anyway. The response in my body was immediate. Sluggishness, exhaustion, headaches and generally feeling disinclined to leave the house unless I have to.

That was last week. Now, I’m sick again. Which isn’t so great in some ways but on the other hand, its served to ring the reality bell around how completely unhealthy our western world lifestyle is. And I’m not just talking about people who eat junk food 24/7.

Word is that one of the biggest triggers for autoimmune disorders is our environment. Yep. Exposure toxic chemicals and heavy metals. In our cities and suburbs, we’re saturated in them.

Coming down from the mountain, it’s all the little things I noticed, that seem to add up: traffic and street lights; cars, buses, trucks and planes; too much concrete; pollution; loud noises; unaware people smacking their bag into your arm on the train; working hard and long hours; not resting when we need to; staying up late. Etcetera.

We get stressed, over-tired and over-stimulated. We run on adrenaline (another autoimmune trigger!) and then when we fall over, we wonder why.

Really though, is it such a surprise that so many of us feel sick all the time? That we drag ourselves through our week days and then to make up for having to do a job we don’t love, overdo the fun and exhaust ourselves even further?

We need to overhaul our entire way of living. But how?

Well… from my perspective and experience, the answer is the same for everyone.

No matter the current status of your health, we all need to:

SLOW THE HECK DOWN!

Recently, the lovely Rachel wrote about Slow Yoga – something a few of us yoga teacher types have been talking about on Twitter for a while now – which is our way of describing a philosophy towards both yoga and life.

We’ve ripped the term from the “slow food” movement of course, but the principals are the same. Well sorta. From a yoga perspective, we’re saying no to Bikram and don’t believe you get any more benefit from a fast-paced vinyasa “power flow” than you do from working more slowly and calmly.

We “slow yogis” all teach what we like to call “nanna yoga” – each of us in our own style. Of course, in slow yoga you can still work your ass off if you want. But instead of feeling exhausted afterwards, you’ll ideally feel more energized and awake.

And… Sarah Wilson wrote about the need for silence. Holy Shiva, we need more of this. Each and every one of us. Less headphones plugged in to the iPhone with music blaring (and disturbing others around you), more observing the world. Taking time to see (and perhaps photograph) things that move you. 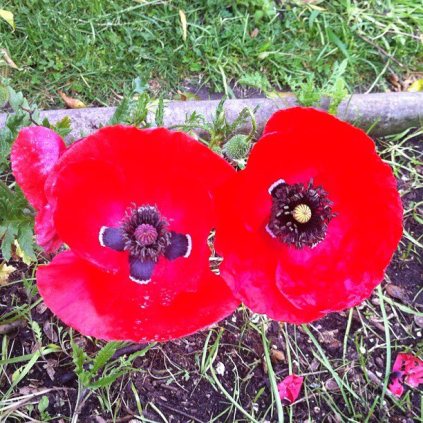 Things that make you feel connected to the world. Without having to blah blah blah all the time, yeah?

Personally I crave silence, and fortunately for me I have my yoga practice which serves as both alone AND silent time. I also try to get as much silence into my day as possible. No radio or TV in the morning while I get ready for work. No TV at all really, unless I’m watching something specific.

So yeah… we can all basically do with slowing down, calming down and doing less. It doesn’t make us weak, lazy or pathetic. Instead, it can be an opportunity to listen to your body. Find out what you really need in order to be well.

And when you’re not well? Pay attention. Not just to getting over your cold, but to what you might be able to change in your life to reduce the levels of stress you face on a daily basis. 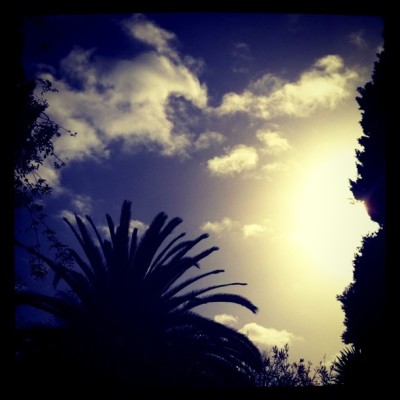 The short answer is that it’s everywhere (inflammation, causing this auto-immune condition of mine) and nowhere (there’s really no need to rush, not even a little bit). Inner fire – too much pitta throwing everything out of whack. Mind fire – going way too fast there, lassie! External fire – stimulus, trying to be where I’m not.

The other answer is that until I learn my lesson, it seems my body won’t quit with the un-subtle hints. I’m trying to develop a sense of humour around the perversity of it all, but it’s tricky sometimes.

Monday night, trying to get to the only health food store that stocks my sanity in the form of the anxiety-killing amino acid, L-Tyrosine… *twaaang*. Yep. That’d be the sound of my right calf muscle tearing once again.

Perhaps because I wasn’t moving mindfully. Desperate to get to the store before it shut in the next five minutes, not paying attention. I’d barely started moving faster, but it was enough. Same as before – that split second decision to change my pace and WHAMMY! Right in the calf muscle.

I spent yesterday working from home, barely able to walk or even hop.

Over the weekend just gone I’d been relishing the progress of my calf tear. Things were going well. I was doing gentle yoga, but no balancing on one leg. No running. Not even any extended walking anywhere. I’ve been good to my leg physically, but my mind hadn’t stopped racing ahead.

Wanting to get things done in a hurry. Be better. Be strong again.

Do ya feel lucky, punk?

This morning I read Sarah Wilson’s latest post on the difference between people who consider themselves “lucky” versus “unlucky”. Seems that the more focused and obsessive we get sometimes, the more likely we are to self-combust. In other words take your dang blinkers off, lady!

Be where I’m at. Look around. Don’t be so anxious to get my anxiety-assisting supplement that I’m not paying attention to how fast I’m travelling.

Sometimes I forget my body is sick

When I’m not crippled with an almost empty tank of energy, I can feel okay-ish. Other than an inability to lose weight and maybe the giant dark circles under my eyes, the casual observer wouldn’t necessarily pick it up either. Unless they’re sensitive to energy.

I also forget that I’m getting older and that I’ve been through a LOT spiritually, physically, mentally and emotionally (we write them separately, but they’re all really one and the same, no?).

I’m starting to put the pieces together. My body communicates back to me the things I’ve neglected or not noticed for some reason. It wants to play fetch and it never stops nudging me to throw the ball back. To keep the exchange going.

Listen to the bod!

Many years ago, my body took me on my first unbidden healing journey.

Then it painfully pointed out to me that I needed to get some help for PTSD. I was so dissociated that getting my attention required extra effort.

And now my body is showing me all the hidden inflammation I carry, caused by too much stress and adrenal exhaustion. The first hint was via my regular blood donation – seriously low iron levels? Could be so many things, but I was encouraged to see a doctor and from there, everything else unfolded.

So why does my body have to go to such lengths? Because I’m dropping the ball. Not listening closely enough and/or the connection between mind and body has been severed a little. Not completely, but enough.

Too sick to feel it

Someone once told me that for all the people out there thinking they’re in good health because there’s nothing perceptibly wrong with them, many are not. It’s just that their systems are too backed up for them to notice.

Being sensitive to your body is a good thing, you see.

I mean, imagine a blocked drainpipe in a sink. Add more crap to the stuff that’s already blocking the drain and do you think that makes a difference? Maybe the blockage isn’t noticed until there’s water over-flowing onto the floor. Oh, we say. The drain is blocked!

Yeah, it’s actually been like that for ages and we just never noticed. Until we do. If we’re lucky, that is.

So I see now that I’m actually blessed, even when I feel like crap. Really. Because my illness was discovered early, before I could become irrevocably sick. I just need to stop thinking it should all be over NOW-NOW-NOW.

Instead, I have to pay attention to the lessons my body wants me to learn:

Doubtless, there are more. But I’m just gonna deal with what’s in front of me right now before I take my next (careful) step forward.